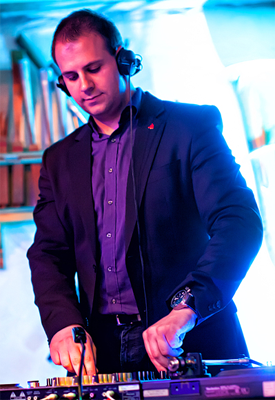 Close to the summer solistic I was born in June 1983 in a small village near Bremen. In 2007 I started my DJ-career in the „city of the pop academy“: in Mannheim. I discovered my preference for playing music long time ago but didn’t have enough money for a professional equipment. At the beginning of the 2000s I realised my dream and bought two Technics SL1200 MKII decks.

Under the direction of established DJs in Mannheim I had gigs at students parties. Short time later I’ve got the possibility to be the DJ for a huge student event at the castle courtyard named „Schneckenhof“ in Mannheim. At the same time I got requests from local companies and meanwhile weddings are the most events I work for. Basically I can be booked for any events : )

Despite the digitised world I can’t imagine workig without my turntables. Thanks to the modern technology it is possible to combine both. Having a huge repertoire of more than ten thousand tracks I can handpick titles from different categories according the audience and this makes me very flexible.